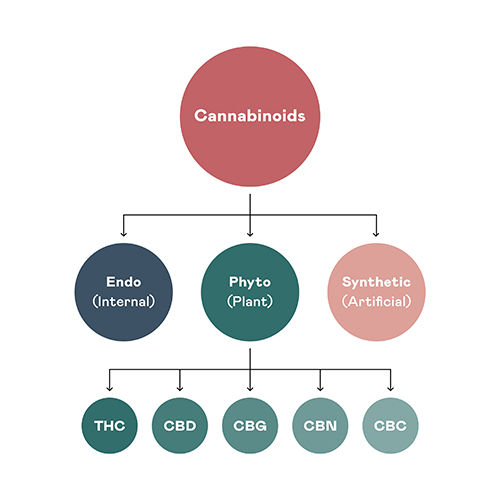 Navigating the language behind the currently ultra-popular cannabis and hemp plant can be tricky, to say the least. Because cannabis is so wildly complex, there’s a lot to learn about its healing properties, and the ways that you can add it to your daily routine for mental and physical health benefits.

However, unlike a relatively simple drug (sup alcohol) cannabis and hemp is comprised of literally hundreds of compounds- each interacting in ways that scientists are just now beginning to comprehend.

So, to help clear up some of the haze surrounding the industry, we’re diving into the wide world of cannabinoids; what they are, why they matter, and how to utilize them for optimal health and wellness!

What are Cannabinoids and Why are They So Important?

Cannabinoids are a group of fatty, naturally occurring compounds found in hemp, cannabis, and other assorted plants, as well as the human body. These cannabinoids are produced and stored in the trichomes (or crystals) of the plant, and are what give cannabis buds their sparkly appearance.

Cannabinoids interact with specific receptors, located in different parts of our central nervous system. Two kinds of cannabinoid receptors have been found to date, CB1 and CB2.

Cannabinoids can also be found in other plants like Purple Coneflower, Electric Daisy, and Cacao (OMG, right?). For an unexpectedly pleasant treat, indulge in a CBD dark chocolate bar and experience the cannabinoid effects of both Cacao and CBD.

There are 3 different kinds of cannabinoid compounds:

Endocannabinoids – Cannabinoids that are naturally produced in the human body (endo: internal)

Scientists have discovered that there are over 400 natural components found within the cannabis and hemp plant; over 100 of these have been classified as “cannabinoids.” Among all of the known cannabinoids, THC (Tetrahydrocannabinol) and CBD (Cannabidiol) are the most abundant.

CBD, on the other hand, has the ability to relax and relieve without the high. CBD is non-intoxicating, meaning it will not make you feel high or “stoned”. This is just one of the many reasons why CBD has become the go-to choice for people of all ages and preferences- especially since CBD products are now widely available in all 50 states.

But, did you also know that there are many other important compounds found in the cannabis plant? One of these other less-know- but nevertheless important- cannabinoids is known as cannabigerol, or CBG.

What is Cannabigerol (or CBG) & How is it Made?

While it’s true that THC and CBD are the most popular cannabinoids, there are actually several others that offer a promising variety of health benefits; one of which is CBG- or cannabigerol.

Since CBG is present in lower levels in most cannabis strains (like, less than 1%) it is considered a “minor cannabinoid”; however, this small-but-mighty compound is worth learning about for a number of reasons!

Similar to CBD and THC, CBG stems from the ulta-important cannabigerolic acid (or CBGA).

Discovered sometime in the early 60’s, CBGA was nicknamed the “mother” or “stem cell” of all cannabinoids, since CBGA is the precursor to the three main cannabinoids, THCA (tetrahydrocannabinolic acid) CBDA (cannabidiolic acid) and CBCA (cannabichromenic acid).

There are specific enzymes in the cannabis plant that break down the CBGA, and “direct” it toward one of these three lines. These acids (when exposed to ultraviolet light or heat) transform into the cannabinoids we fondly known as THC, CBD and CBG!

Because it is non-psychotropic, like CBD, CBG has a promising wide range of potential applications; as an analgesic, therapy for psoriasis, and even as an effective antidepressant.

Recently, the NCCIH announced their intention to research minor cannabinoids, like CBG, which will allow us to further understand this important cannabinoid. Scientists are very excited about the initial studies, and are promoting future research into CBG alone, or in combination with other more prominent cannabinoids.

What is the Endocannabinoid System?

As we mentioned above, cannabis and hemp plants aren’t the only things that contain cannabinoids. Our bodies also naturally produce our own endocannabinoids, and we have these receptors all throughout our bodies.

The endocannabinoid system (ECS) is a complex cell-signaling system that was discovered sometime in the 90s, while researchers were exploring the effects of THC.

Cannabinoids “show off” their effects by interacting with specific cannabinoid receptors present on the surface of cells. So, if something’s “off”- like sleep, mood, digestion, etc.- the endocannabinoid system gets the spotlight. Because cannabis and hemp cannabinoids are able to imitate the ones our bodies naturally produce, it can result in a pretty impressive balancing act.

It should definitely be noted that research on cannabinoids specifically is limited, and experts are still trying to fully understand the ECS. However, what we DO know is that it plays a large role in regulating important bodily functions, and research has shown it to be linked to:

How Does CBD Interact with the Endocannabinoid System?

Again, due to the fact that we haven’t been able to study cannabinoids until very recently, experts aren’t entirely sure how CBD interacts with the ECS.

But although there are still things we have yet to learn about the ECS, science indicates that if your hormones are out-of-balance, your natural levels of endocannabinoid molecules can be negatively impacted. This is where CBD can help. Cannabinoids, like CBD, can help support our ECS by decreasing the breakdown of our body’s endocannabinoids.

While the details of how it works are still being ironed out, anecdotal evidence (and a slowly growing body of research) suggests that CBD can help with a wide array of health issues like pain, nausea, mood shifts, appetite, inflammation, and many other symptoms.

If you’re looking for more information about CBD and your ECS, go check out How Does CBD Support Your Endocannabinoid System?

It’s very important that you never use CBD as a way to put-off seeing a health care provider about a medical problem. If you are experiencing a health-related issue, it’s always recommended that you talk to your doctor first, so you both can put a game plan together.

Ultimately, CBD and other cannabinoids are generally thought to be safe. But it’s still worth doing your own research, and talking to a specialist if you want to add them to your daily routine, especially to avoid any interactions with prescription drugs you might be taking.

The good news is we only have more to learn from here. At the end of the day, it’s up to us as conscious humans to listen to our own bodies and be open to the potential healing of plant medicine.

Have you incorporated CBD into your lifestyle and noticed some positive changes that you just have to share? Tell us below- we love hearing from you!